Welcome back to another #FridayThoughts, the weekly blog series where I discuss the last week on Social Media.

It’s been a few weeks since Facebook rolled out their new camera feature (complete with Snapchat-esque filters) and fully integrated ‘Stories’ feature. I covered the introduction of Messenger Day into Facebook’s Messenger App a while back and after some rigorous testing Facebook finally decided to introduce their anticipated feature to us all.

It’s no secret Facebook are trying to emulate Snapchat’s features that make them so popular and effectively stamp them out, but one thing that comes to mind with me is, is copying them really the way to do that?

My feelings have been mixed on the whole Story bandwagon… I think these posts kind of sum up my thoughts: 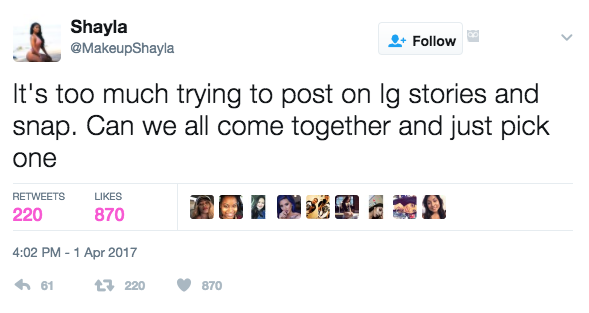 I think that people will end up swaying towards one… which one that will be only time will tell but I’m definitely still Team Snapchat.

That being said, I made some observations from Facebook’s new camera feature. The whole thing feels a bit smoother, there’s a bigger range of filters (albeit some a bit boring and pointless- but then again aren’t they all pointless?!) there’s of course a bigger reach on Facebook, but with that also comes people seeing my story that I’m not particularly interested in sharing it with! It appears at the minute that Pages are unable to share a story with their followers- something that I think could give Facebook Stories an extra boost if added in the future.

Facebook really pulled out the stops with their filters in comparison to their previous overlays which were nothing next to the AR features Snapchat offer. Although I was testing the feature with my 4 year old brother who loves Snapchat filters and he was not as impressed with Facebook’s offering, asking in distress: “why don’t these do anything!”

One thing I have noted is the lack of users who are sharing stories on Facebook. I don’t know whether it’s just my friend list but I haven’t noticed a huge influx of stories on my timeline, and a lot of the updates I have seen are people sharing their Snapchat usernames…. But then again, when Instagram Stories launched I found a similar pattern emerge.

Stories could be great for brands- especially those who may not want to make the venture onto Snapchat. I’ll definitely keep my eye on this feature as I have some visual clients that this feature would work well with if it does get rolled out to pages.

I’m not really sure what the future of stories is and what platform people will gravitate to… All I know is I’m still Team Snapchat for now.

We’ve seen so many story features I wouldn’t be surprised if this was real!

I’ve commented on Twitter’s issues with trolls and harressment in previous Friday Thoughts and this week they announced their groundbreaking tactic to banish the trolls for good.

Twitter claimed that egg accounts (accounts with no profile picture) were associated with trolling and harassment so they’ve decided to drop the egg for a (less offensive?) default photo.

In a blog post titled “Rethinking Our Default Profile Photo” Twitter announced they were ditching the egg for multiple reasons. They highlighted how they wanted to add a bigger sense of self-expression and encourage people to ‘’show us who they are.’’

However, the reason that stuck out the most to me was this: “We’ve noticed patterns of behavior with accounts that are created only to harass others – often they don’t take the time to personalize their accounts. This has created an association between the default egg profile photo and negative behavior, which isn’t fair to people who are still new to Twitter and haven’t yet personalized their profile photo.”

In my opinion, if somebody wants to troll they’ll do it whether their profile picture is an egg or a miscellaneous silhouette and changing the default avi is not a productive way to be tackling the problems with harassment on the platform.

The change was not really welcomed by a lot of Twitter users, some believed that Twitter were avoiding the real issue at hand: 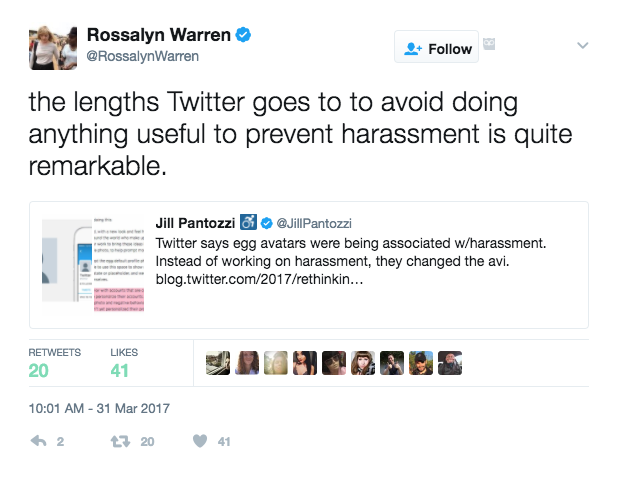 One woman liked the egg icon so much she decided to make her own: 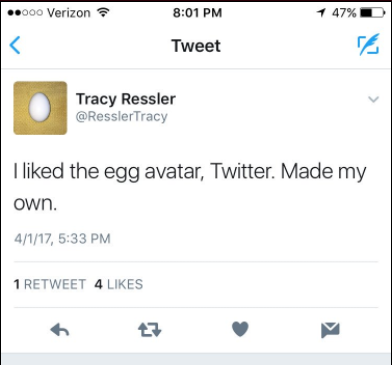 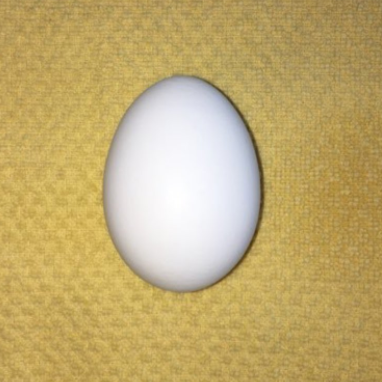 Whereas one was just plain upset about the whole thing: 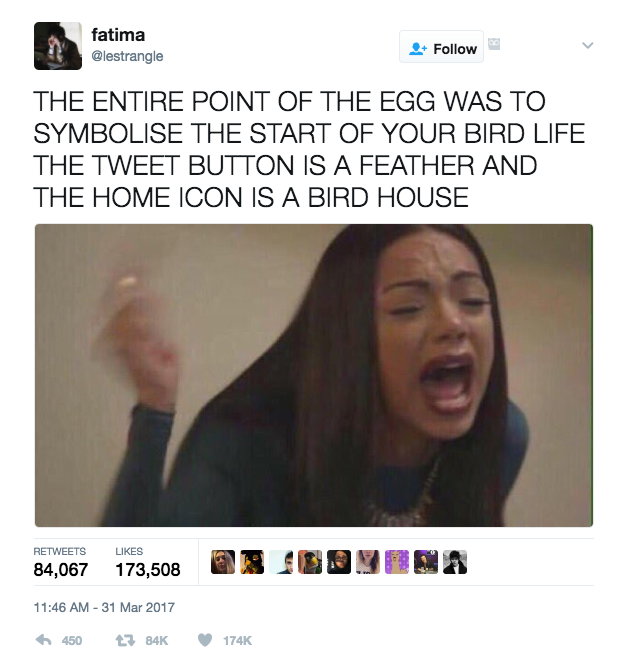 I don’t think this new profile picture change will deter many, if any, accounts from sending abusive tweets to users. It may encourage more non-offensive tweeters to personalise their account but I don’t think that’s the real issue they should be focusing on.

Hopefully they work on the issue in the future and people continue to stick with the platform, despite it’s issues.

As we know, Facebook fully launched their story function this week, in the hopes to eliminate Snapchat and convert people to their platform for all their social needs.

But Snapchat aren’t giving up that easy. Their platform has always been based around keeping in touch with friends and people you know as opposed to connecting with new people as their slogan “Snapchat is for friends” suggests.

Until now that is. In hopes of boosting user engagement Snapchat have added a story search bar. Users can now search for stories they may be interested in. And whilst it doesn’t let you connect with new users it does allow you to discover new content, boosting your chances of staying on the app for longer.

I like the concept of searching for stories. You can search for locations and keywords and if there’s a story for it, you’ll be able to see it.

Snapchat are using algorithms to scan the caption text, time and visual elements found in Snaps submitted to ‘Our Story’ and group them by theme. For example, it could pull out Snaps with the words “dog” or “puppy” in captions, or use machine vision to detect the shape of a real dog in the photos or videos, and aggregate them into an Our Story that comes up when people search for “Puppies.”

Snapchat may not have the reach that Facebook does, but the users that do use Snapchat daily are engaging with the app for around 20-30 minutes a day. Millennials seem to love Snapchat and with over 2.5 billion snaps being sent a day, why not maximise the value of the content and allow the whole platform to be exposed to what Snapchat has to offer.

I’m sure you’re aware that I love Snapchat and I really hope they fine tune the company to accommodate more to businesses (better ad platform, analytics?) in order to boost traction and keep users on their side.

That concludes this weeks #FridayThoughts, as always I hope you enjoyed and I’ll be back next week with another post.