As I’ve missed a week there’s definitely a few things to catch up on!

This week instagram introduced the feature to add a photo ‘stream’ as opposed to just one post. The feature allows you to add individual filters and tag users on each individual photo of video.

I can’t say that this was a feature I (or probably many others) were crying out for, but it is quite cool.

Instagram already eliminated the need for third party apps when they introduced their “Layout” app and I think this is just another way to keep their users sharing photos on Instagram as opposed to other networks.

The feature has already been available for business account advertisements for a few months. I think for brands it’s a good way of showcasing products without having to spam people’s timelines (there’s nothing I hate more than that!).

I’d love to know what you think of the update, have you used it? Do you even scroll through the images or just carry on scrolling down your timeline?

You may not know the name Pewdiepie unless you’re a Generation-Z gamer but he has a huge following online with over 53 million subscribers. He is the most subscribed channel on YouTube. Swedish videogamer, real name, Felix Kjellberg found himself in the firing line after news outlet, The Wall Street Journal reported a series of ‘anti-semitic’ comments made in his videos.

Not only has this bought negative press to the content creator but has also resulting in him losing a major television deal with Disney and YouTube cancelling his online streamed reality series.

Pewdiepie is known for his often unfiltered, outrageous comments in his videos. I can’t say I’ve watched a lot of his videos but after researching his content I can tell he has a great sense of humour and despite his often questionable jokes you can tell they’re in light spirit.

Despite being the most subscribed channel he is definitely not one to shy away from having an opinion. He has been very vocal about YouTube’s change in algorithm even threatening to delete his channel after a sudden loss in engagement.

When posting on the Internet there’s so much more room to be creative, there are fewer guidelines and as a result of this there are obviously some pieces of content that would never be published across traditional media.

Traditional media outlets are definitely still adjusting for the new age of ‘fame’. Social Media and web usage has began to outrank TV and print. This is proving especially true of millennial users. As a result of this many ‘online stars’ can receive negative press from the media, if any at all.

Felix notes in one of his videos that traditional media outlets often don’t report on online stars and when they do it’s generally to comment on how much money they make or how outrageous their content is.

There definitely is a gap between Traditional Media, Social and Digital Media and I think we’re a long way from it closing, if it ever does.

Traditional Media outlets are starting to understand Social Media trends but it often feels out of touch and even a cry for popularity at times.

As for Pewdiepie, he made a video titled “My Response” after the news broke about the derogatory comments which were made. The video talks about how the media took his comments and put them out of context and made him seem a lot more worse than he was.

Although personally I do not agree with his views, I do understand how the media has a way of taking comments and twisting them to their advantage.

You can watch Pewdiepie’s response below:

If you’re wondering more about the comments he made you can check out this article. (If you’re easily offended you may not want to read!)

I thought I’d end with something that’s been all over my timeline the past couple of weeks. If you’ve got Twitter you’ve probably become acquainted with Gordon Ramsey’s account recently.

In true Ramsey style users tweet their dishes to him for his honest review…. And they definitely are honest! 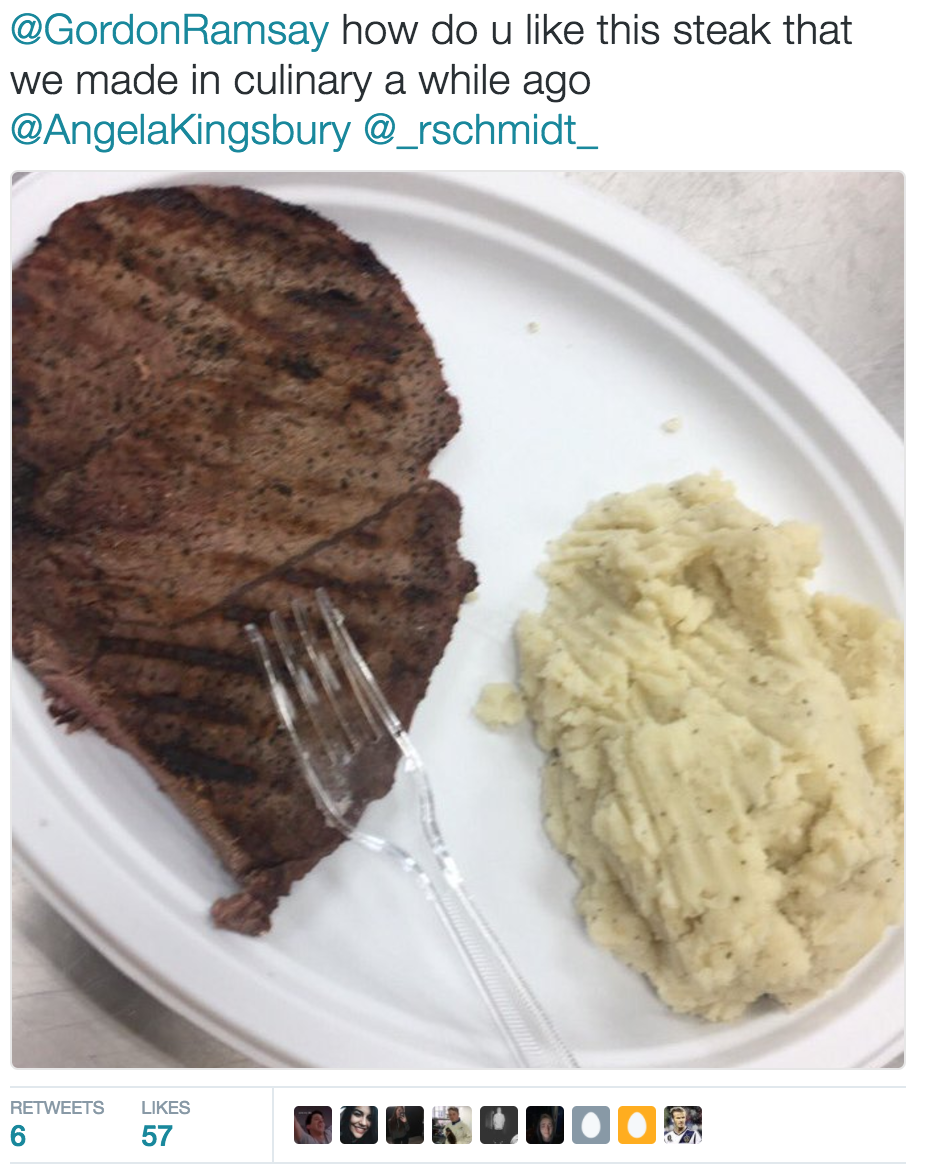 Take this delicious steak for example… 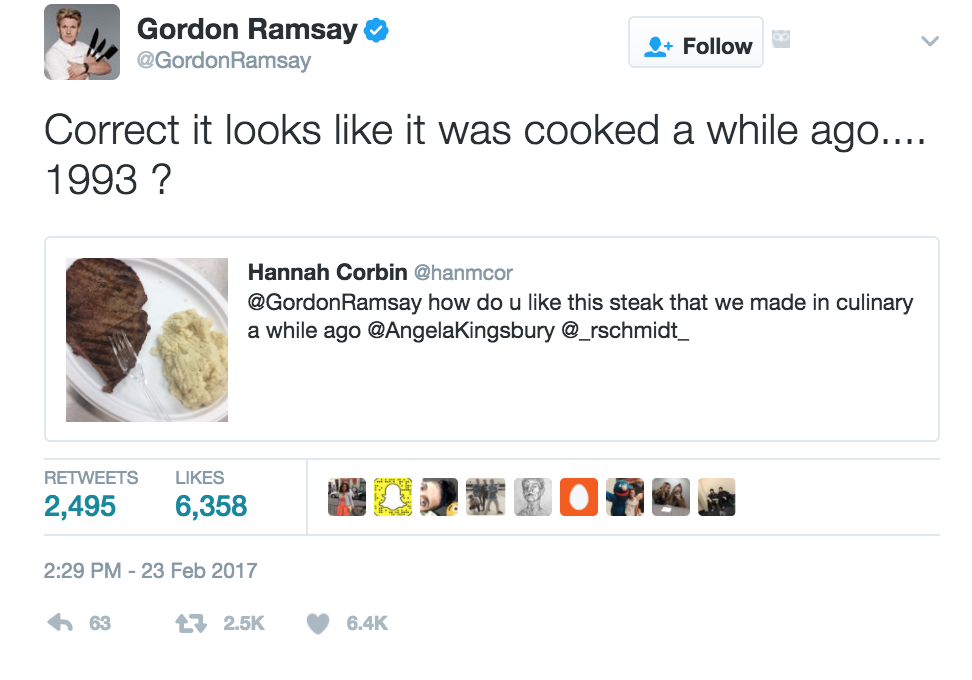 As you can see the response from these comments has been huge. But they don’t stop there, Gordon had some advice for this girl’s Mother… 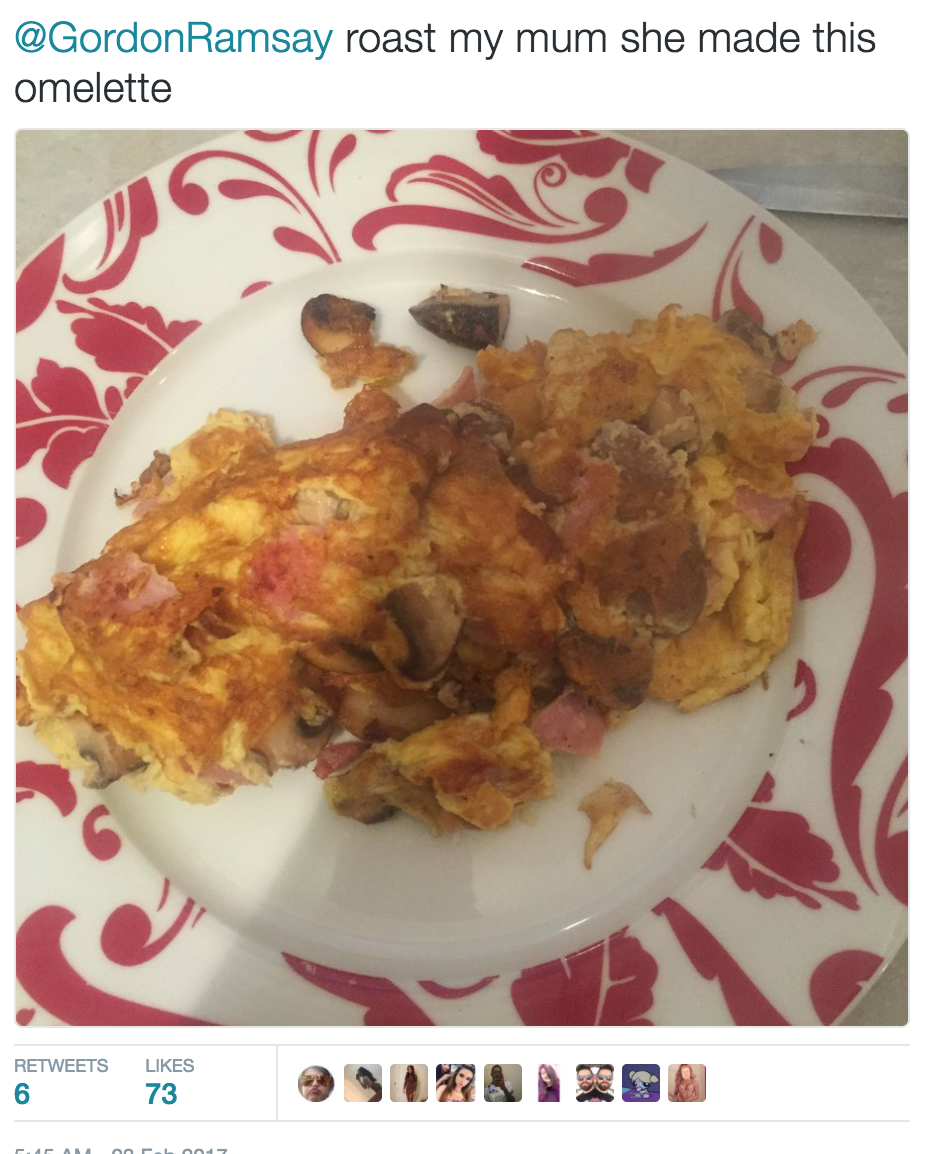 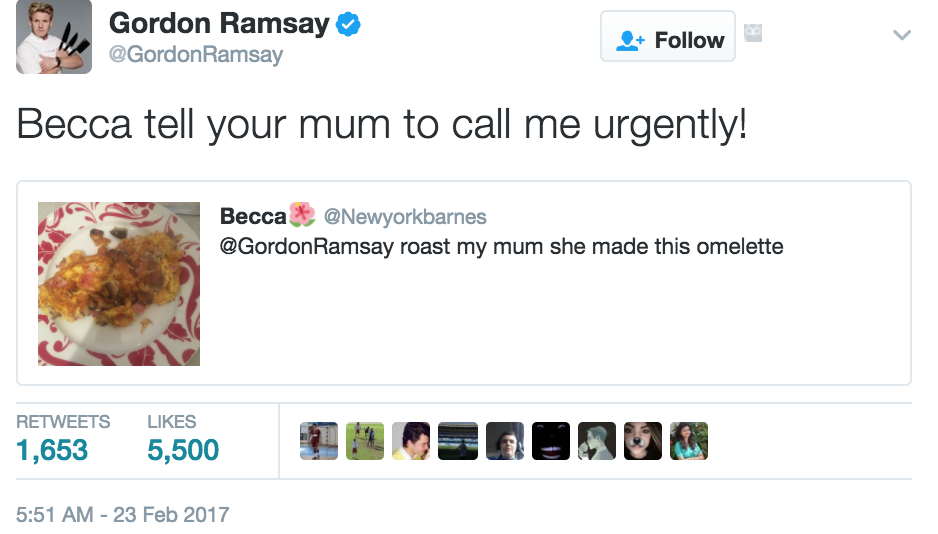 I must say that one does not look great…

Surprisingly, he didn’t hate everything! This user almost got a compliment… 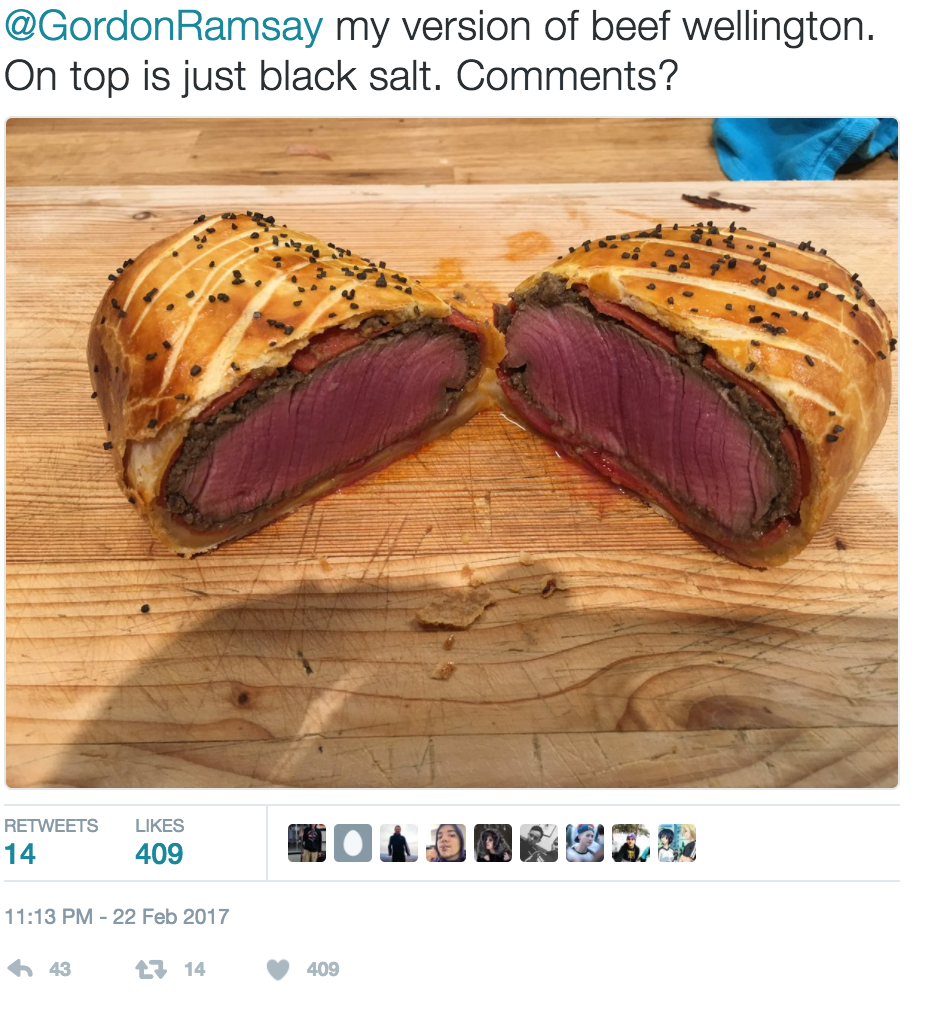 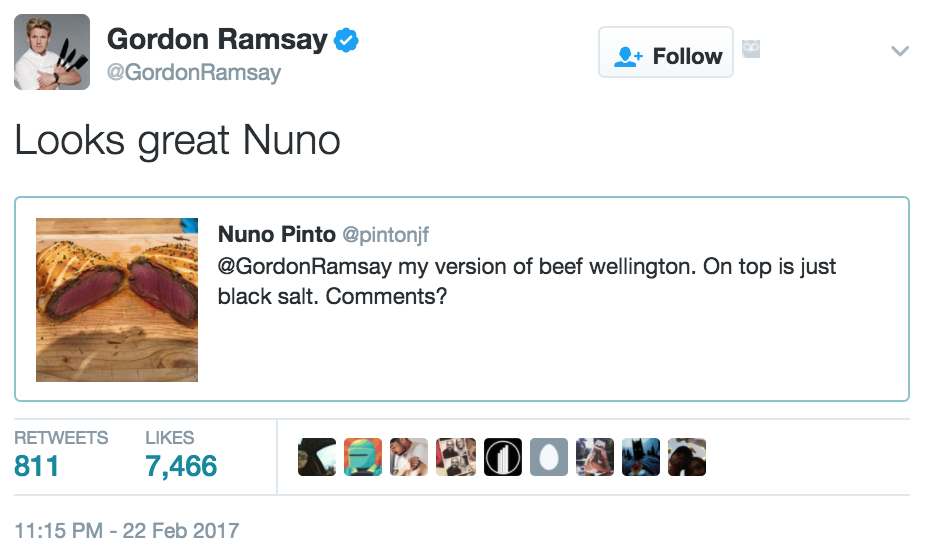 Not the most heart felt, but it does look great!

I think what Gordon is doing on Twitter is genius! Taking the very traits he is famous for and using them to gain exposure on Social Media is exactly what he should be doing. I can’t say he’s somebody I’d be interested in following if it wasn’t for these responses.

Often with topics or people that may be typically ‘boring’ or niche, the things they’re famous for is being different. Stand out against competitors and give them a reason to notice you, even if you think your brand falls into a ‘boring’ category you can still appeal to the masses whilst promoting your products and services. Just find what makes you stand out, whether that be a great brand backstory or a funny character in the office, don’t be afraid to be a bit different and show some personality.

With Social Media there’s room to have fun and be a bit different and maybe say things you wouldn’t plaster across a billboard. But to me that’s the fun of it, Social Media is the personality and voice of your brand so it’s important to nail it and make yourself stand out!

P.S I just wanted to add my personal fave response from GR: 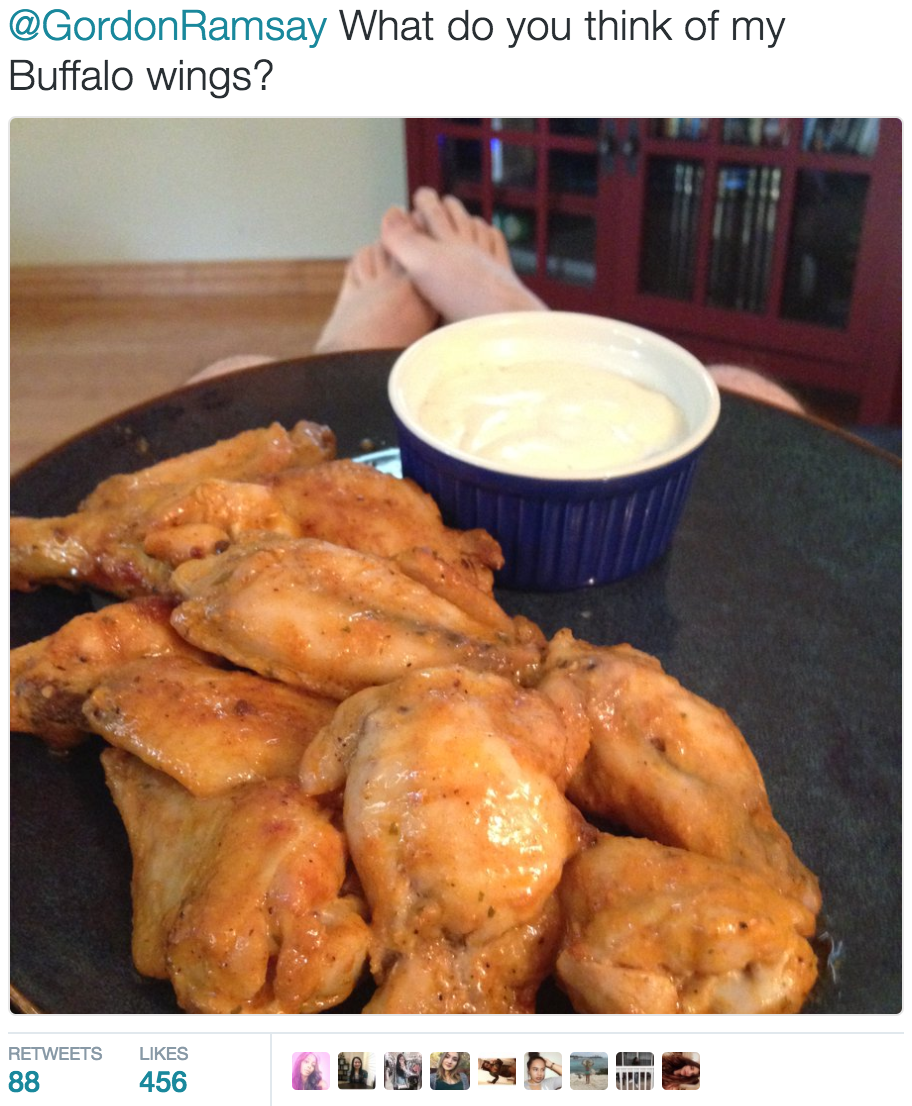 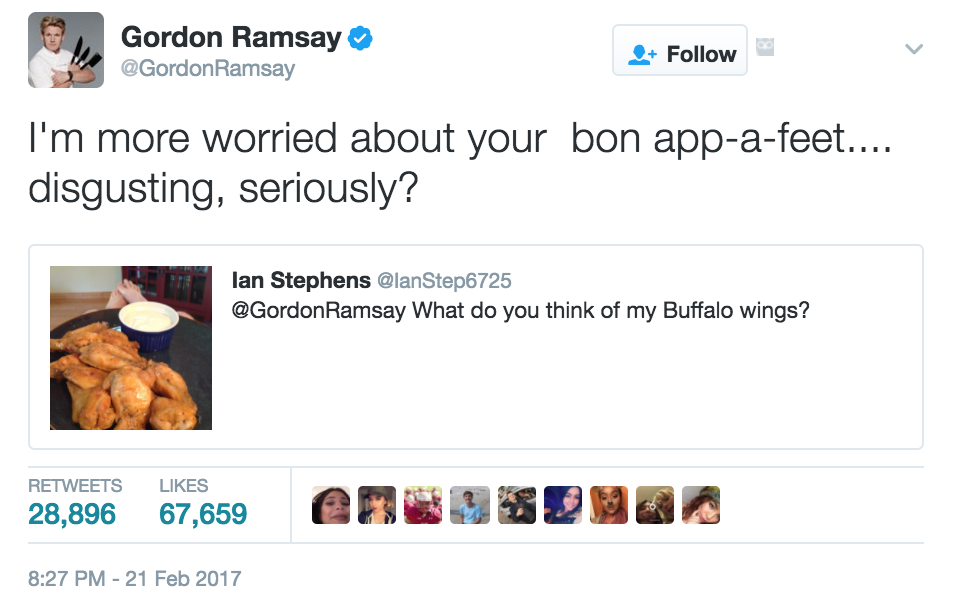 With almost 70k likes I think it’s a few other people’s favourite too!