Welcome back to another #FridayThoughts. Last week’s was a little bit different with a focus on International Women’s Day but I really enjoyed writing it. I’m back this week with the usual set-up but if you’re unfamiliar with these posts every week I do a “Social Media roundup” of anything interesting that’s happened on Social Media throughout the week, whether that be updates on platforms, brands making an impact (bad or good!) or anything else in between!

After rigorous testing Facebook have finally rolled out their anticipated feature “Messenger Day.” It’s been in the works for some months and after being available in selected countries since late last year it’s finally started rolling out into our Messenger Apps. The feature allows users to share photos and videos of their day whilst also having the option to add stickers, text and writing. Quite similar to some another feature we’re already acquainted with…. 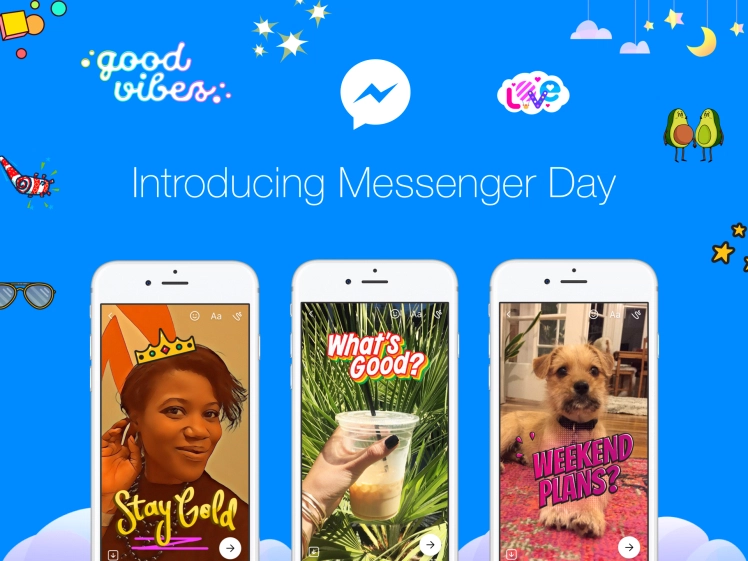 To me it feels as though Facebook are looking to stamp-out Snapchat in any way they can.This isn’t the first time we’ve seen Facebook mimic a Snapchat feature. Take Instagram (which is owned by Facebook) who introduced stories late last year. Whilst Instagram Stories and Messenger Day lack the face transforming filters that make Snapchat so popular, Facebook are rumoured to be working on VR-style filters that mimic Snapchat’s.

So what happens if Facebook do manage to mimic Snapchat in terms of filters? Would you make a full switch from Snapchat to Facebook? For me, it feels like there are too many ‘story’ options and the more platforms start to inhibit these features the less interest I have in them.

Another thing that keeps me on Snapchat is the demographic. There is definitely things I post on Snapchat that I would not post on Facebook (Facebook me and Snapchat me do not know each other!) and whilst there’s the option to block who sees my ‘day’ on Facebook, why would I? When I could post it on Snapchat happily, without going through the effort to decide who I want to see it.

I can’t say I’ve seen many users ‘share their day’ with me on Facebook (unless they’ve blocked me from viewing it!!) and when I updated my Messenger App and saw the feature, I will admit I thought ‘another one, really?’ but then again I was so not into Snapchat when it first started gaining popularity and now it’s my favourite platform. So is this more than just a trend? Will ‘stories’ revolutionise Social Media in the same way that the introduction of timelines did?

What I find interesting is that there’s no option for pages to use Messenger Day at the minute. Whereas brands are free to use Snapchat and Instagram Stories as they please. Maybe Facebook are holding out on how popular the feature becomes because rolling it out widespread. Before their worldwide launch Facebook tested the feature in Poland and Australia for 6 months, with a combined reach of almost 30 million, they must have received positive feedback to take such a risk rolling it out widespread.

WhatsApp (also owned by Facebook) introduced a ‘status’ feature recently where users can add photos or videos, also for 24 hours, which is then shared across their contacts. So it appears temporary content is here to stay. Visual content such as images and videos are in and written updates are being put on the back burner. Temporary content has proven to be popular amongst audiences so maybe this is just a new age of content and Social Media.

I’m sure we’ve all seen the fake accounts floating around Twitter, with 0 followers and an egg as an icon, spreading spammy links and messages. Twitter have had an issue with bots and fake accounts for some time and studies suggest that over 48 million of Twitter’s 319 million active monthly users are bots.

But they’re not all bad, many brands use bots to give automated responses to customers or tweet announcements and news. Twitter are said to have a system in place to determine which are legitimate and are being used for things such as customer service and which are spam but refuse to reveal what the process is, I presume to prevent the people behind the bots learning how to trick the system.

Many Marketeers have strayed from Twitter as a Social marketing tool in recent years due to the sheer mass of trolls and fake accounts that make up a big chunk of the platforms users. It’s even been said by some that Twitter is dead, however, this might be credited more to their declining market share and monthly users.

In terms of business and clients it’s definitely the tool I use least but in my personal life it’s one of my most used platforms. Despite the 140 character limit there’s always felt like there was a certain level of freedom on Twitter. Twitter to me is like Facebook’s cooler, younger sibling. There’s less rules, anything goes and everyday you see a new crazy tweet- often that can’t believe has even been posted!

And whilst that’s great locked away on my personal, private account, for businesses, campaigns are often ridiculed and overlooked. If you make the slightest error, say something that could be misinterpreted or pretty much just say anything at all be prepared for the world of Twitter to come for you. No tweet is safe and I guarantee you will always get at least one sarcastic, sassy or just plain rude reply come your way.

Twitter haven’t made any real huge, innovative changes in recent times. Other networks seem to be introducing new features but I must say I’m glad Twitter have not jumped on the story bandwagon…yet… I think they just need to work on eliminating bots from the platform and maybe more brands will get on board with the site.

Brands that have demographic of around my age (19) tend to be more active on Twitter. It’s definitely a platform favoured by younger generations. I’d say that’s thanks to its light hearted demeanor and often outrageous content.

I hope that Twitter is here to stay and for the mean time I think it is, even if that’s just for teens and not brands. Twitter is a great platform when used to your advantage and I think if they eliminate their issue with trolls and fake accounts they could have a chance of winning back the world of Marketing. That is of course unless another platform comes along in the meantime…

Do What You Can’t

I came across this video on the YouTube trending page and it instantly caught my eye. YouTuber Casey Neistat created a video all about doing what you can’t and how the internet has opened up a world of opportunities for so many people, allowing them to fulfill dreams they were told they couldn’t or never thought were possible.

Neistat goes on to talk about how everything he’s been told he can’t do in his life, he’s accomplished. He was told he couldn’t move to New York and he couldn’t make films because he had no money and didn’t go to Film School. He now has a recording studio in New York and a YouTube channel with over six and a half million subscribers. If he stuck to doing what he was told he could achieve or listened to those who told him he couldn’t do something he wouldn’t be in the position he’s in today and more than likely wouldn’t be as happy and open minded as he appears to be now.

He emphasises the fact that whilst you might not be able to do these traditionally successful things like have a talk show, or be a movie star you can be apart of a new age of success. One that doesn’t require huge equipment and doesn’t have so many rules. A success where you make the rules, not anybody else.

He ends the video by saying “Never forget, you don’t have to listen to anybody, because in this new world no one knows anything!” Which to me, is so true, there are no rules to success anymore and the routes that people may once thought were the only way to success are actually only one small channel and that there are so many more, better opportunities if you just take the risk!

That concludes this #FridayThoughts. I hope you enjoyed reading it as much as I enjoy writing it. As always, I’ll be back next week with another post, but until then you can check out last weeks here which was all about International Women’s Day!